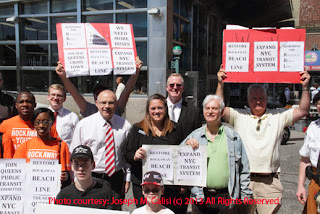 How we define ourselves:
The Queens Public Transit Committee is one group that supports the former LIRR Rockaway Branch Line (RBL) for its original purpose, transportation. We want to see the reactivation of the RBL for the benefit of all the people of Queens and the City of New York. In short, Queens is notorious for long commuting times, especially by those that have no influence and power in the political process. The RBL is about fairness, inclusion, prosperity and equality.

We do not support a competing exclusive narrow park plan that will benefit only a small but fortunate section of Queens.

Flaws of the ‘Park Plan’
The proposed park alternative will have little or no effect on relieving overcrowded buses and trains on our transportation corridors as it would only benefit a small area of Queens while the RBL would benefit all of Queens, the entire transportation system and the City.

Comparisons to the High Line in Manhattan are not appropriate. That former New York Central elevated right of way was created in the middle of the Meatpacking District (which was already a tourist attraction) that feeds foot traffic there. Aside from small shopping districts, there’s nothing to feed the ex-LIRR right of way creating a negative return on investment – no ancillary revenue would be generated and would be nothing more than a money pit.

Problem definition:
Queens is suffering from an inadequate overcrowded transit system and is notorious for long commuting 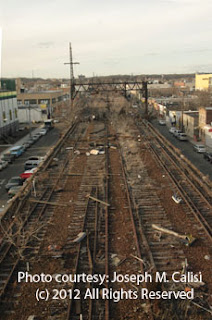 times for those who have no influence and power. On average, it takes 1 1/2 to 2 1/2 hours to travel from South Queens to North Queens by public transportation. This includes actual bus travel times and not a figure derived from a timetable. Express buses frequently are caught up in traffic and a connecting subway ride while efficient, sometimes requires multiple transfers until the final destination is reached.

Bus service is at best inefficient for a couple of reasons. The maximum passenger load is about 85 total riders. With increased dwell time due to slow passenger boarding/de-boarding and stopping in traffic for lights and other vehicular traffic, increasing bus service will have little or no effect on relieving overcrowded buses and trains on our traffic corridors. While the MTA’s Select Bus Service has improved bus service somewhat in the corridors where it has been implemented, it should not be a replacement to rail service on the RBL.

Our roadways are clogged and dangerous with numerous vehicles that cause pollution and longer commuting times. The health problems created by the vehicular traffic lowers our Quality of Life and it's getting worse by the year. The original shutting down of rail service on the RBL created these health risks, reduced prosperity and opportunities in Queens. 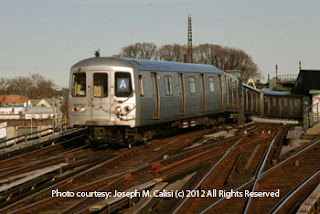 Problem solution:
The reactivation of the Rockaway Beach Line to rail use is the best transit alternative as it solves all these problem issues. Trains are more efficient than a bus and or a narrow park.

We need to expand the transit system by reactivating the RBL as a subway and or LIRR line. The RBL is the best transit alternative as when the Long Island Rail Road operated trains on this line, a typical trip into Manhattan took about 35 minutes - compare that to a trip into Manhattan with our current set of  transportation options.

A train is more efficient than a bus and or a narrow park and here’s why. For example, a typical subway train car can accommodate 100 people and thusly, a 10-car train can carry about 1,000 passengers. The average rail car will last about 35-40 years while a bus has an average lifespan of 7 to 12 years before scrapping. With full length buses costing just under a million dollars each, this is NOT a good long-term transportation investment. In short, in terms of a cost/benefit analysis, the rail option is the best transit alternative and should be the only one considered. The park plan represents separation, isolation, division, exclusion, increase travel times and more transportation congestion.

Brief history of the line:
The Long Island Rail Road began service on the Rockaway Branch Line in the 1800s and continued to serve mid-Queens and the Rockaways into the 1950s when after the last of a series of trestle fires on the Beach Channel Bridge, service was discontinued on that route to the Rockaway Peninsula in the early 1950s and that part of the line was sold to the City of New York in 1952 (today’s subway service). In 1962, all LIRR service on the branch was discontinued and abandoned in 1962. This part of the line has lain fallow ever since.

Summary:
The RBL would increase capacity on our transit system, increase property values and create a more positive economic cash flow than turning the former rail line into a park which generates nothing.

We are open to sharing the RBL with a trails option but we will not accept the exclusive park only idea as this line already goes through a park area.

Railien Trails Transportation Blog
A wholehearted welcome to my new media feature, a blog on transportation issues at large. If it's about trains, planes, autos or anything that moves - I'll write about it here. A transportation photojournalist since 1993, I’ve contributed to the information world in print (magazines and newspapers) and electronic media (TV reporter and interviewee, radio and websites). One of my prideful events was during the 2004 NYC Subway Centennial. I was interviewed in 2 languages (English/Italian) that was viewed and heard worldwide. I was one of two transportation historians sanctioned to speak ‘on camera’ for the year-long series of events. My TV credits include: Telly Award finalist (11-minute documentary on the last days of mainline steam trains in the world in China); NY Emmy Award nominee for news magazine story of the 75th anniversary of NY’s IND subway. All in addition to the many published photographs (including several magazine and newspaper covers) and articles. Thanks for stopping by for a trip into my new world. Oh yeah, please stand clear of the closing doors and have a one-seat on my train!!!